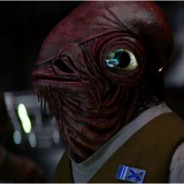 Admiral Gial Ackbar is a fictional character in the Star Wars saga. A member of the amphibious Mon Calamari species, Ackbar was the foremost military commander of the Rebel Alliance who led major combat operations against the Galactic Empire.  Ackbar played a supporting role in the 1983 film Return of the Jedi, and later became a prominent character in the novels, comic books and other media of the Star Wars expanded universe. 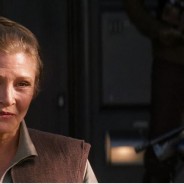 Leia Organa Solo (born Leia Amidala Skywalker) was, at various stages of her life, a politician, revolutionary, and Jedi Knight of the New Jedi Order.  The daughter of Jedi Knight Anakin Skywalker and Senator Padmé Amidala of Naboo, Leia was the younger twin sister of Luke Skywalker, and, shortly after her birth, she became the adopted daughter of Bail Organa and Queen Breha of Alderaan, making her a Princess of Alderaan.  An accomplished Senator, Leia Organa was most famous for her strong leadership during the Galactic Civil War and other subsequent galactic conflicts, making her one of the galaxy’s greatest heroes.