Home »Announcements » I Am Rebel Legion: The Story Of William

I Am Rebel Legion: The Story Of William 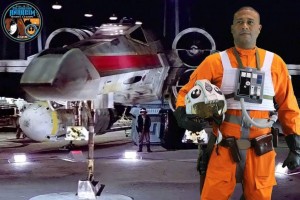 This article is part of an ongoing series of testimonials from our members, who gladly shared their stories about how The Rebel Legion has made a positive impact in their lives as well as the ones from the people in their community.

If you want your story to be featured, send it to angie.rivera@gmail.com

I remember when I was a kid, my father (may he rest in peace) took me to the now defunct theater in Cataño to see “The Empire Strikes Back”; I only remember a few scenes that stayed in my mind.  Years later, they took me to see “Return Of The Jedi”, which I remember in its entirety.  Since then, I’ve been a life-long fan of the Star Wars saga.  Whoever claims to know me and not know how a big of a fan I am, doesn’t really know me at all.

Idiot.  Stupid.  Immature.  Ridiculous.  Those are only a few of the things people write about me and don’t have the slightest idea.

I belong to a worldwide, non-profit organization called The Rebel Legion, and my local chapter is called Puerto Rico Base.  In this organization I learned to build costumes that are replicas of the originals used in the movies.  Through this organization I can give back to my community by bringing joy to whoever needs it and help my people.  I don’t charge a penny for doing all this and I don’t seek any kind of recognition.  I do this because it’s my way of helping others.

By being a member of Puerto Rico Base, I had the opportunity to collaborate with entities like: Make-A-Wish Foundation, American Cancer Society, Boy Scouts of America, Relay For Life and Children’s Hospitals, among others.  I’ve also made friends that will last for the longest time, here in Puerto Rico as well as in other countries like Argentina, Mexico, Venezuela, Japan, and Costa Rica, among others.

If doing good to my community means to be called “idiot, stupid, immature, ridiculous”, so be it.  I’d rather be called those things than being called criminal, abuser, drug trafficker or addict.

My name is William Desiderio and I am a Star Wars Fan.  I have a family which I adore, and they support me in everything I do.  I have a Bachelor’s Degree in Electronic Engineering and a good job.  To My God and to my family I thank for everything I do and everything I am.