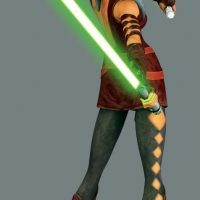 Ahsoka Tano, nicknamed Snips by her master, was a Togruta female from the planet Shili who trained as a Jedi apprentice during the Clone Wars, the conflict between the Galactic Republic and the Confederacy of Independent Systems. Tano was assigned to Jedi Knight Anakin Skywalker by Jedi Grand Master Yoda, and she demonstrated an eagerness to prove herself worthy to be his apprentice. Tano was involved in the defeat of the Separatist army on the planet Christophsis and was important to Republic efforts during the Battle of Teth. Along with Skywalker, Tano was instrumental in acquiring the Republic’s safe passage through Hutt Space, due to her part in rescuing the son of Jabba the Hutt, which ensured an alliance between the Republic and the Hutt clans.

Orange (even paint) with accurate markings in the face. Must match reference pictures.

Colours are maroon or dark red, the material can be suede, micro-suede hunting calf, moleskin or similar.

Sleeveless dress, that cover butt and crouch. It must have a high collar, a teardrop hole in the chest and an open back. (See reference pictures).

Four (4) armband, that make a pattern of three (3) diamond shapes.

Must match dress and bracers colorwise and be the same material as either dress or bracers.

Fingerless gloves that reach under the bracers. The gloves can be a slightly different color than dress and bracers, but must be a close match.

Bracers reach to the crook of the arm on the inside, but do not cover the elbow. The bracers must match the dress. The bracers have three (3) golden buckles with an stylized “H”. (see reference pictures).

Pointed half-sleeves under bracers in a darker more purple-red/brown color. The half-sleeves cover the outer elbow point, but does not go past the elbow.

A single elongated pentagon in pale pink, with pattern in a darker purple on it. Must match reference pictures.

Boots and Chaps are the same colour and material as the bracers. The chaps reach to the kneecap and are closed with five (5) golden buckles on the outside of the leg. The buckles have the same design as the ones on the bracers. Light weathering is recommended but not a must.

Two brown belts that come together in the front and back. They are forming two “X”. One part is resting on the hips the other part is hanging down to the hip joint. On the back there is a leather pouch. In the front there is an hexagonal, silver buckle.

Two covertecs are fixed on the lower parts of the belt, left and right from the buckle.

Two silver food capsules are fixed on the higher part of the belt, left and right from the buckle.

– Necklace / choker: a thin golden ring with a golden diamond. – Six (6) small and one (1) large triangular, pewter pieces of jewellery on the head framing the face. – Pewter ceremonial chain on the montrals. (See reference pictures).

PLEASE NOTE: The costume standards are a guide, yet are not an all inclusive outline of required elements. The judges will be looking for quality of workmanship, accurate execution and use of materials in addition to these general standards check lists. If you have a question about fabrics, colours, and parts choices for your build please contact the Detachment Officer for your category about parts/materials you are considering before you start your build, or post a ‘Work in Progress’ (WIP) thread on the forum. (LCJ listing here)