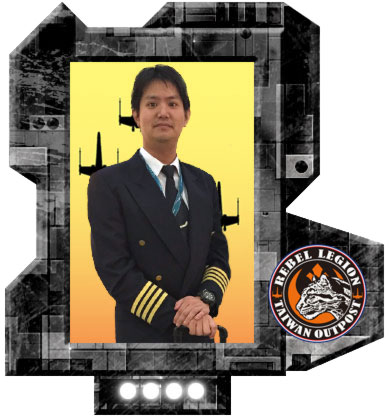 Art was a great pilot who worked for China Airlines and enjoyed his time in the sky. He was also a huge Star Wars fan since childhood. His favorite costume in the Rebel Legion was the X-Wing pilot, just like his job as a commercial airline pilot. Art also loved collecting lightsabers and had 8 of them in his Star Wars collection.

He already finished his pilot costume and started to make his Jedi costume just one week before his passing. He was that close to joining this big family as an active member of the Taiwan Outpost, but sadly this dream would never come true.

Now we bestow upon Art an honorary membership, in memory of him as a dear friend and a good partner who dedicated himself to charity events and using Star Wars to spread love.

All of his friends from Taiwan Outpost will always remember him and all the great memories we had with him.

Dear Art, we know now you’re with the force and you will be with us as a shining star, always…